The Netherlands is the main constituent country of the Kingdom of the Netherlands and borders to Germany and Belgium. Often, you will hear the much older designation “Holland” (refers only to North and South Holland). The Caribbean Netherlands are designated as special municipalities of the Netherlands. Netherlands has been a constitutional monarchy since 1815 and a parliamentary democracy since 1848. We have been to the great City of Amsterdam with the canals of Amsterdam, Vincent van Gogh, Heineken Experience and more. 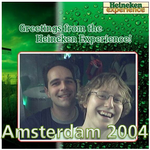